Film still from 'The power of taste'

Tadhg Crowley is the Curator of Education at the Glucksman in University College Cork. The Glucksman presents a wide-ranging programme of 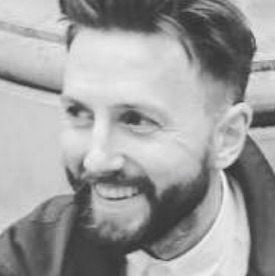 temporary exhibitions accompanied by an extensive education programme to engage visitors of diverse interests and backgrounds. A graduate of Limerick School of Art and Design Tadhg’s role at the Glucksman is to help foster an appreciation of the visual arts among the wider public. In early 2015 Tadhg devised and delivered the first Visual Art module on the Certificate in Contemporary Living Course at UCC. Tadhg has expanded the Glucksman schools programme over the past 3 years and in 2015 over 2500 students attended workshops and tours at the gallery. Tadhg introduced the Glucksman Teachers programme in 2014 and it now includes seasonal Art Teachers Masterclasses,Preview Evenings and Summer Course. Tadhg has recently presented at the IMA Annual Education and Outreach Forum and at the inaugural Arts in Education Portal National Day at IMMA. He has lectured on the MA: Art and Process programme at Crawford College of Art & Design as well as the Futures PhD module at University College Cork.

When as an earnest 14-year-old, I stood with my family and friends in St. Peter’s Cathedral, Cork City and admired my artwork that was on exhibit, it mattered little that what we were looking at was an oversized postage stamp that crudely depicted my sense of the most important Irish people in history (with a disproportionate number of fellow Corkonians!!). What really mattered, was at that moment I knew that my hard work and talent was being recognised, admired and shared with the public. To experience that sense of pride around my art was pivotal in the way I approached and thought about my creativity for years to come.

In April 2016, Aislinn Spillane, art teacher at Christ King Girls’ Secondary School, contacted me about the possibility of working on a project together and what immediately became clear was that we both wanted her students to have the opportunity to experience a moment like this. Another key motivation for the project was to provide the students with the conditions where they could really investigate a subject, to explore ideas and find exciting methods to create their visual responses.

‘Gut Instinct: Art, food and feeling’ was an exhibition at the Glucksman that drew on the cutting-edge research of Professor John Cryan, and his colleagues at the APC Microbiome Institute at UCC. Using artworks that explored the materiality of foodstuffs and that tested the boundaries of good taste and revulsion, the exhibition explored how digestion relates to our mental and emotional states.

Gut Instinct presented the ideal starting point for the project and from where the students could begin their own creative journey through ideas of the way they used and thought about food.

In December 2016, the students were introduced to the exhibition, its central themes and we looked at a number of the artworks in detail. After the guided tour, the group had the opportunity to creatively record their initial responses in a printmaking workshop with artist Killian O’Dwyer.

Back in school, the students were provided with additional information on the artists/artworks and on the research of APC. I visited them in early January to discuss the plans for the next stages, principally the film they would make. What was striking about this visit and the discussions with the group was that they had highlighted an area around food and emotions that was not explored in Gut Instinct. The students were drawn to ideas of appearance and the pressures attached, what that means to the way we feel about food and how that could develop to eating disorders. The Gut Instinct curators consciously took the decision not to venture into this field of investigation when developing the exhibition as it strays from APC’s research aims and crucially they felt it was an area that deserves considered investigation and reflection in a separate moment.

Clearly this topic had significance to the group and it was impressive to see that in the prints they created for the exhibition in March 2017, they had looked closely at how they could create images that would articulate their thoughts and concerns.

The students were presented with the challenge of developing a film script that would reflect their thoughts on the exhibition, before returning to the Glucksman in early February for filming. On a Friday morning in February, the students worked together under the guidance of filmmaker Dervla Baker to produce the short film ‘The Power of Taste’

The 5th year students at Christ King Girls’ School had their exhibition moment in early March when their artworks went on display at the Glucksman. I hope they too experienced that sense of pride that I felt way back at the beginning of my life in the arts.

For more information on The Power of Taste or the Glucksman Schools Programme please contact education@glucksman.org or visit glucksman.org