My Dog Under the Table/Dean 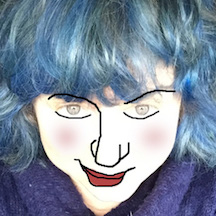 Julie Forrester is a visual artist based in Cork City. She has been working with all kinds of people in all kinds of settings since her return to Ireland in the 1990s. Her work celebrates process and open ended enquiry into materials and context. Julie Forrester is currently in residence with Kidsown Publishing Partnership at Killard School, Co Down.

My mother describes a picture of me age 4, she shows me a photograph, there I am sitting, legs spreadeagled, on the floor in front of me is “Julie bear” (my childhood teddy bear), in the diamond of floor encompassed by me, my legs and my bear is a piece of paper and on that paper I am making a drawing. Now I look at the photograph, I see it as my mother describes, I can’t get back to that place, I see it now outside of myself – a child absorbed. But I know that feeling.

I have a drawing my daughter made, age 6, it has the date on the back of the frame, in her own writing the legend reads: “My dog Under the table 23.12.97. Annie”. Annie doesn’t remember doing the drawing, and nor do I. I do remember the events around this picture, and where we were living at the time. Our dog was Miko, a stray we homed, and Miko had puppies, nine in all. The Daddy was Bart, our housemate’s dog.

The drawing shows an inky black shape with multiple extremities which seem to be leaking out from the body. On closer look you can make out the 4 black legs and 6 elongated teats, the mother’s tail is curled backward, awkwardly echoing the arc of her body. At her back are 3 leggy blobby pup shapes, there are 2 more at her front. There are five puppy shaped blobs in all: 4 are missing.

I look at the picture and I see the repeated arcs of dogs back, ringed over and over and framed finally within the square and capped by a border on three sides. I see the mother’s pink tongue haloed by exclamations of blue spittle, I see her ears askew, her eyes, which are barely visible, have obviously been drawn into the black silhouette at later stage, and this action has left a bleachy green rim where one marker dye acts on another. I see the mother dog held within the horse shoe form of the yellow basket bed she had, I see a turquoise ring with turquoise triangles pointing in and pointing out, this jagged, joined up ring form is contained within the orange square of ‘under the table’, a liminal floor/table space. Here the angle changes from top view to sideview and I see the table holding it all together. The table has two pink drawers. There is a large fruit bowl on top of the table, it is a bowl we still have, made by her Granny (It clearly shows the apple design of Bandon Pottery) The bowl contains stalked fruits. Beside the bowl is the most mysterious object in the picture – is it a yellow door?

This drawing contains a concentrated world, a complex mixture of emotion, observation, invention and imagination. It is a brave drawing, it is a necessary drawing and it is a mysterious drawing. It is a drawing that describes an event long forgotten by its maker. It is a drawing that gives me a glimpse into another world and one that I know is real, even if I wasn’t there.

When children draw they bring forth worlds, turning the inside out. This way of processing of experience is something that continues to fill me with awe, it still draws me. I love the word Draw, it has so many meanings, encompassing ideas of pulling, attracting, taking in and letting out, one can “draw breath” and one can “allow tea to draw”, “draw a pistol”, or a bath, as well as a line, it has a particular tension between hiding on and letting go. One time when I was a teenager I went with my father to the mart, we brought our sketchbooks. Later an acquaintance politely asked us what we were doing there, when I said “drawing” he said, looking at my father slightly puzzled, “drawing cattle to the mart?”

In the previous blog, I spoke about some drawing we did together at the Virtually There project in Killard house. This was not exactly a collaboration, we hadn’t agreed on making a ‘work of art’ together, it was a live action conversation. The whiteboard was the testing ground where our dialogue took place. It was a space where images were placed, excavated from our archives, grabbed online, or captured from life, they were uploaded, they were drawn out and drawn upon, discarded, elements were shrunken, enlarged, obliterated and moved about by one person or another, threads were created and broken over the course of a conversation, it was often hard to keep track. The drawing happened one mark or image beside another in a space which became layered and sequenced over time. We were celebrating together the act of drawing.