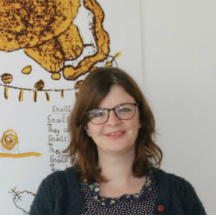 Ciara has a PhD in English from Maynooth University. She has worked as researcher on the National Collection of Children’s Books (TCD) and “Gender Identity: Child Readers and Library Collections” at the Centre for Children’s Literature and Culture, DCU. She has taught English in various universities and currently works at Kids’ Own Publishing Partnership as office administrator.

The Creativity and Change programme meets once a month for one full weekend, each weekend bringing new experiences, challenges, and connections. These full weekends allow participants a depth of experience in learning, critical thinking, and creativity. There are also spaces for pause, reflection, and making connections woven into the structure of the course, and I begin to appreciate the space for reflection that the weeks between each course weekend allow too.

The idea that creative engagement is key in facilitating transformative learning experiences that might effect change in the way we see, exist, and act in the world is at the core of the Creativity and Change programme. With this focus, new possibility is discovered within seemingly simple, everyday acts. Listening, speaking, and observing, core components of many adult education courses, are first given renewed attention. For example, as part of our learning in a day dedicated to transformative learning and the creative process, participants pair up and take turns speaking and listening without interruption. The experience of listening intently and actively, and that of speaking uninterrupted demonstrates perhaps how often we take these acts of speaking and listening for granted in teaching, in facilitation, and in learning, and in simply communicating with others.

Consideration of communication and creativity is furthered in a weekend dedicated to the exploration of visual facilitation, which broadly refers to a process of facilitating meetings, seminars and other exchanges in visual form using images, words and symbols. As someone used to working only in the written word, this was a challenge for me. We began by visually representing sounds and playfully making marks on the page in groups. Once those daunting first marks were made on our paper canvases, the temptation to overthink into inaction was removed, at least temporarily. As we gradually built toward the challenge of visually documenting the conversations of other participants, the merit of incorporating creatively challenging work into my own facilitation and my learning became clear. A completely different part of my thinking and concentration was engaged. I gained new insight into the process of how I listen as well as how I order and create meaning. Just as the exercise on speaking and listening drew attention to the dynamics of dialogue, this act of visually representing the groups’ words brought a new attention to how I interpret and document, as well as a feeling of responsibility to accurately reflect and honour the group’s conversation.

Developing new ways of seeing and interpreting continued throughout the weekend on visual facilitation, which concluded with the class working in small groups, each tasked with creatively representing different sets of data. Groups worked on visualising data relating to the deficiencies of the Housing Assistance Payment (HAP) scheme, the difficulties people with disabilities face when trying to access social housing, and on numbers of people on housing lists against the units of social housing available – important data that can become meaningless in spite of its devastating reality. From an assortment of seemingly random materials, groups created stop-motion animations, made clay models, assembled sets, and designed performances incorporating material to represent this data. What emerged from the varieties of modes and forms through which this data was visually represented was perhaps the force of that which could not be measured or visualised, the shock of what this data represented that could not be contained or incorporated numerically. Through this creative process, the groups began to find new ways to see and explore some of the most pressing justice issues in our contemporary moment.

This website uses cookies to improve your experience while you navigate through the website. Out of these, the cookies that are categorized as necessary are stored on your browser as they are essential for the working of basic functionalities of the website. We also use third-party cookies that help us analyze and understand how you use this website. These cookies will be stored in your browser only with your consent. You also have the option to opt-out of these cookies. But opting out of some of these cookies may affect your browsing experience.
Necessary Always Enabled

Performance cookies are used to understand and analyze the key performance indexes of the website which helps in delivering a better user experience for the visitors.

Analytical cookies are used to understand how visitors interact with the website. These cookies help provide information on metrics the number of visitors, bounce rate, traffic source, etc.

Advertisement cookies are used to provide visitors with relevant ads and marketing campaigns. These cookies track visitors across websites and collect information to provide customized ads.

Other uncategorized cookies are those that are being analyzed and have not been classified into a category as yet.