Image copyright Curo with the pupils of Ballyroan National School 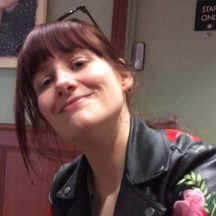 Lucy Elvis is a director of CURO, a not-for-profit organisation committed to public philosophy. CURO helps communities think together more effectively by inviting them to become Communities of Philosophical Inquiry. CURO works in schools, libraries, galleries and festivals as well as organising clubs and camps that include scholarship streams for children from less privileged socio-economic backgrounds. They like to get people thinking in places where they least expect it and to listen to the ‘big ideas’ that matter to groups who often aren’t given a voice.

When Lucy isn’t engaged in public philosophy, she is completing her PhD thesis and lecturing in Philosophy at NUI Galway. She is also an independent visual art curator and a board member of the TULCA Festival of Visual Art.

Sometimes, our young philosophers’ work can appear deceptively low tech. Walk in on a CPI (a community of philosophical inquiry) and you’ll find children sitting in a circle, some speaking, some listening and sometimes a cuddly toy, or a ball being used to indicate who should be talking. But, in these seemingly straight-forward talking shops, mind-bending ideas are explained, exchanged, and even worlds reimagined.

So far, so not-so-different from ‘circle time,’ right? However, there’s much more happening in philosophical dialogue than ‘talking.’ Unlike conversation, where I might share some news, and then hear from someone else, content in the CPI is anchored in a philosophical question (a ‘big’ ‘tricky’ ‘contestable’ and ‘open’ question) that the community have voted on together. In the CPI our learners are trying to solve ‘big problems’ together. This requires careful critical thinking before making a contribution. In answering big questions like ‘Should we always be punished for stealing?’ I have to decide my overall position (yes/no) and the reason why I think so.

If the only goal of a CPI were sharing opinions, then the result would be a straight-forward debate. But, undertaking philosophical inquiry together, means finding the best possible answer we can to our ‘big question’- a tally of yesses and nos won’t cut it. We will have to test the consequences of any overall position we adopt, and this might mean imagining scenarios, (‘what about stealing something small from your sister?) adjusting them, (‘what about stealing something back?) or clarifying what you mean by using analogies to point at similarities and differences (‘stealing something back is like creating fairness.’*)

The creativity described here needs critical thinking too, to support the new possibilities it imagines, and to create boundaries for creative thinking to ‘go-beyond.’ Because of the ways being critical and creative work together, the CPI allows our young learners to see how thinking from radically different areas of the curriculum work together, and how, scientific discovery and creative expression are both united by care and curiosity that powers our passion to ‘find out more.’

The CPI is a place for talking through, exploring and building possible answers together. Making thinking about concepts or big questions’ share-able’ can be a challenge, and demands creativity, and a rethinking of what ‘being creative’ can be, if we can move from just sharing ideas to making and revising them together.

*The examples here are based on a workshop with Ballyroan National School, at Ballyroan Library, who asked the question: ‘Should we be punished for stealing’ after they read ‘The Whopper’ by Rebecca Ashdowne together.