Jean Tormey is Curator of the Early Years and Families programme of resources, 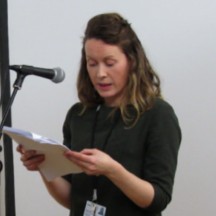 events and projects at Tate Modern and Tate Britain for under 5s, 8-14s and intergenerational audiences. She has worked on Families’ programming in galleries since 2008. Her practice involves working with artists, audiences and colleagues at Tate to develop content and activity through which diverse children and families can be considered as equal and valued visitors to Tate. Jean has worked in gallery learning since 2005 as an intern in New York and as a learning curator in different galleries in Liverpool, Kilkenny and London.

In my final blog post I’d like to focus on the most recent addition to Tate’s Early Years and Families’ programme offer – Under 5s Explore the Gallery – an artist-led, monthly event for under 5s and their families held in the collection galleries of Tate Britain. http://www.tate.org.uk/whats-on/tate-britain/workshop/under-fives-explore-gallery.

To introduce another voice to this series of blogs, I asked Assistant Curator Lucy McDonald [1] (the lead curator on the under 5s programme strand) to reflect on her involvement in the development of this programme.

Where did the idea for ‘Under 5s Explore the Gallery’ come from?

The impetus came from an institutional objective to increase the family offer at Tate Britain – to improve attendance, but also visibility of this audience. It felt very important for the sessions to be held in the galleries – openly exploring the spaces and artworks as opposed to out of sight in a studio space. The presence of other gallery visitors in the sessions supports the building of families’ confidence to find their own individual way of being in the gallery as a family.

What are the key elements of this programme for you?

Key elements include the role of the artist, who are briefed carefully about their position in the sessions and invited to find ways of supporting families’ journeys through the galleries. Within this, children are encouraged to lead – deciding what to look at, where to go and setting the pace. The artist shares ideas they are exploring in their own practice to provide strategies that families can use to experience the spaces and artworks in their own way. These strategies can include, but are not exclusive to, ways of looking, ideas to promote discussion about art and/ or encourage physical exploration of the galleries. This is usually done with a selected range of materials that are introduced at carefully considered moments.

The structuring of the sessions is also key. Being in and moving around the galleries is core to the programme, so limiting the number of visitors that can join is important. Maximum group size is 30 including adults, ensuring the sessions do not become overwhelming for the participants or other visitors. This works towards the families being integrated into the everyday landscape of the gallery, so it doesn’t feel like a ‘special event’ as such, and families can feel empowered to return independently. The structure includes careful consideration of timing and pace, with the two hour duration allowing a relaxed, unrushed atmosphere.

Another key aspect of the programme is having a dedicated space to gather for the introduction, where the tone and some key ideas are first introduced. This space also acts as a place to return to during the sessions should families need to, as well as somewhere to re-group at the end to reflect on what has happened – encouraging families to recognise the learning that has taken place.

Reflection is core to Under 5s Explore, and it is encouraged to take place during the session and at the end, where families are invited to consider what is happening and what it means for them. Participants have access to digital cameras, where they can capture what they notice or something that happens within their family unit that they feel is of value. Images are projected at the end of the session, and families are invited to observe and chat about what they and other families notice, giving value to what they have done and learning further ways of exploring the gallery from other families.

What kind of artists’ practices are you interested in exploring, and how have artists used their practices to facilitate activity?

I am interested in practices that encourage a gentle approach to exploring new ideas, and artists that are skilled in supporting families to develop an understanding of artworks on their own terms – so that sessions are accessible to all visitors including new ones. For me, artists who have been particularly successful in facilitating the sessions in the past are those who are open to seeing them as a series of experiments or possibilities, and are confident in allowing unexpected happenings to unfold and emerge.

What has been the audience response to this event?

It has been really positive, with parents and carers reporting a real shortage of gallery/ museum programme specifically for this age group, especially ones that encourage children to lead and value the unpredictability they can bring to these environments. Through interviews with families during the first few months of the programme, I discovered that many have preconceptions about Tate Britain being less welcoming of families than Tate Modern, and less appropriate for under fives in particular. Happily, feedback gathered indicates that families greatly value the sessions, enjoy experiencing the galleries together and show an interest in returning.

How do you think this strand might develop in future?

I have been particularly struck by how families (especially young children) very intrinsically and naturally explore the space of the gallery with their whole bodies through movement. I would like to work with more artists who work with movement to experiment with this further, as I feel movement as a practice is a positive way to address the negative ideas about gallery behaviours and etiquette that many families have. This would need to be done carefully with the right artist to ensure it didn’t become too performative or intimidating in nature.   I would love to see all families feeling like they no longer needed the support of the sessions to visit and be in the galleries, and that through the sessions a network of families could emerge, who become advocates for under 5s in galleries and museums more broadly.

I think Lucy’s viewpoint in this concluding post reiterates some of the Reggio Emilia philosophy, as well as our non-negotiables discussed previously, and hope that the series as a whole have given a sense of the inspiration, thinking around and development of the early years programme at Tate.

[1] Lucy McDonald has been Assistant Curator on the Early Years and Families programme for the last 2 years with a special emphasis on early years, and has recently taken over as Curator (jointly with Jessie McLaughlin) to cover my maternity leave 2017/18. Lucy also worked as an Assistant Curator on the final year of the Big and Small programme in 2013/ 2014 and as project manager on a number of BP Family Festivals in  2014 and 2015.