Kids' Own Virtually There project, image by Lucy Hill 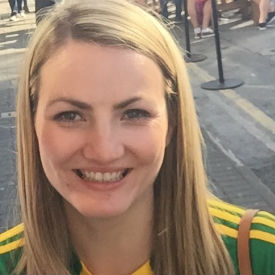 Carmel is a 5th class teacher in Scoil Eoin, Balloonagh, Tralee, Co. Kerry, a large school with three streams of each year group and over six hundred pupils. Carmel and her class, a mixed group of boys and girls, are currently participating in the Virtually There project.

We as teachers are becoming preoccupied with generating art which looks well on a display board and has no imperfections. In my experience the children aren’t engaging with this routine and are craving more freedom to make mistakes, try things more than once and use lots of different materials. It’s difficult to unearth an exciting art lesson for every week, particularly with older classes as they have made or used many of the lessons with other teachers. When my principal suggested Virtually There to me I was intrigued, yet I was also hesitant to take on such a project due to the need to have good IT experience and how limited our technology is in the classroom.

Virtually There orientation involved an enjoyable day of artist and teacher pair work. This was a fantastic way to become acquainted before we attempted to organise the project itself. Initially, I thought the project was going to be difficult to coordinate as my artist for the project, Lucy Hill, was based in Westport, Co. Mayo while I teach in Tralee, Co.Kerry. With emails and phone numbers exchanged with set about arranging when and how we would do the art with the children in my 5th Class. I needn’t have worried. Lucy was willing and excited to visit us and work around our daily schedule. We trialed Skype a few times before our start date and it worked perfectly. However, throughout the project we had many dropped calls and in particular the last day, being a particularly windy day on the west coast of Ireland,  meant we had to resort to using our phones. In spite of this I felt the project worked brilliantly and both Lucy and I continued with the art while keeping in touch using whatever technology was available.

My class loved the project, mostly exploring new textures and materials, while being given the freedom to use them in any way possible. There was movement, freedom, learning, inventing and fun. Each week there was a novel idea to inspire the children. Lucy would firstly explain the idea, next they would give their responses and suggestions before setting to work. Throughout each element of the lesson the children would approach Lucy on the laptop screen to show their progress, ask questions and get suggestions for any design concepts. This was an effective part of Virtually There which ensured the children were thoughtful in formation and it gave them a guideline as to how they would achieve the goal in the art time. The children also looked forward to hearing Lucy’s interpretation of what they had made each time and her input inspired them further or helped them to see what they had made in a new light.

The opportunity to blog about our experience throughout Virtually There was one of the most appealing aspects of the project for me. Combining some literacy skills to the project and blogging about an important topic relevant to the children was something I had envisaged they would love. However the children weren’t as excited about the blogging process as I had hoped. This may have been due to limited time we could spend doing the blogging due to other classroom subjects and constraints. I also found Word Press time consuming to use in adjusting images etc. and I often had to spend a long time myself formatting the page layout. If we were lucky enough to be involved in Virtually There or another similar project again, I would try to give more time to the blogging and allow the children more freedom to do all the adjustments, possibly with a different group in charge of each weekly blog.

I feel Virtually There has definitely inspired me to allow children to get messy through art, to give them opportunities to use all sorts of materials, to encourage them to use their own imaginations and be creative rather than make a carbon copy of an art piece.